This is the first of a series on the Lowfat Treebanks (Nestle1904, SBLGNT), which were designed to make it easier to visualize and query Greek sentences.

This post focuses on visualization. The Lowfat treebanks have three stylesheets that provide three different ways to visualize a treebank, but this post will focus on Treedown, a visualization that can also be used as a text-based notation. It will also mention Boxwood and Brackets, two other stylesheets related to Treedown.

The right notation makes it easier to think clearly.

Here is an example of Treedown, showing John 1:1 in Greek and in English.

The labels used in the above diagram are:

Here are some advantages of Treedown over some other approaches to visualization:

Treedown does not prescribe a particular set of labels. My posts will usually use the role attributes we use in the Lowfat Trees:

We are in the process of adding additional labels to better account for adjuncts, interjections, vocatives, etc. Another project could choose a different set of labels.

Treedown can be seen as an alternate form of a bracketed notation familiar to many linguists. Consider this representation of the same verse:

In this example, a bracket without a label is equivalent to a clause, and a bracket with a label is a constituent with a defined role in a clause. In Treedown, an indentation level is equivalent to a bracket and the outer bracket that defines the sentence as a whole is omitted. At any indentation level, the constituents can be shown vertically instead of horizontally. Let’s convert this to Treedown. First, let’s remove the outer brackets and put each bracketed region on one line:

Now let’s replace the outer brackets for each clause with an indentation level and line up the constituents in each clause vertically:

In the Lowfat Trees, our Treedown does not currently display labels for conjunctions (this is a matter of some debate, a tradeoff between explicitness and figure/ground issues when reading a text).

The equivalence of Treedown and bracket notation has some practical ramifications. Not only does it guarantee that Treedown is well defined, it means that we can convert our notation to bracket notion in order to use a variety of existing tools. For instance, here is that same sentence as displayed using this Syntax Tree Generator, taking the bracket notation as input:

Wait! What are we trying to represent?

The idea for Treedown came from a series of experiments writing stylesheets for the Lowfat Treebanks. Since we have syntax trees for the entire Greek New Testament represented in XML, I developed a variety of CSS stylesheets, looking at simple and challenging sentences in John 1, Luke 1, and Ephesians 1. Some formats made it hard to show the structure of a long and complex sentences at all. Some did a good job of grouping related words, others did not. Some were much easier to read than others. Some could be written easily with a word processor, others relied on graphics that made this impossible.

Here are some insights that came from that experiment:

The following sentence from Mark 16 illustrates some of these issues. Here it is in English and Greek:

In this notation, the letters label the verb and its arguments - subject and object, in this case. The + label is used for adjuncts:

an adjunct is an optional, or structurally dispensable, part of a sentence, clause, or phrase that, if removed or discarded, will not otherwise affect the remainder of the sentence.

These clauses are optional in precisely this sense: we can simplify this sentence by removing the adjuncts without changing the basic meaning of the main clause, producing this simpler sentence: “Mary Magdelene and Mary the mother of James and Salome bought spices”. The clause starts with a temporal adjunct identifying the time that they bought spices (“the Sabbath having passed”). It ends with a causal adjunct establishing the reason that they bought spices (“in order to go and anoint him”). Modeling these as adjuncts simplifies the notation and makes relationships more explicit.

Currently, many relationships in the Lowfat trees are represented strucurally via nested clause structures, not via roles. That means that the structure of many sentences is not clear without showing the clause boundaries more explicitly. Boxwood is a stylesheet that represents Lowfat trees using Treedown conventions, but adding these clause boundaries. Here is the current representation of Mark 16:1 in Boxwood: 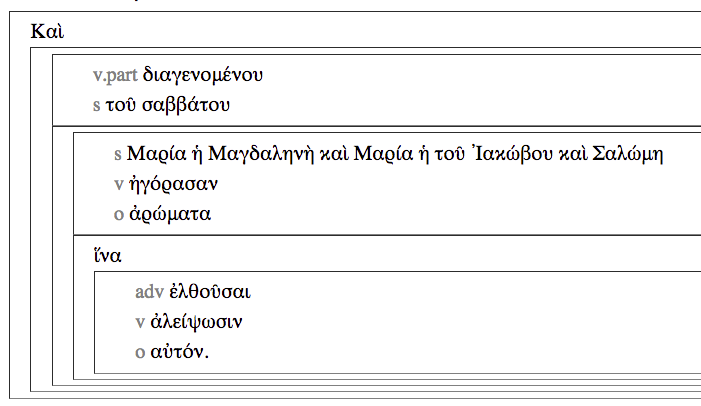 Although the adjuncts are not explicitly labeled, the structure is nevertheless clear. Boxwood is not as useful for sentences like John 1:1, where Treedown is already quite clear for the Lowfat trees: 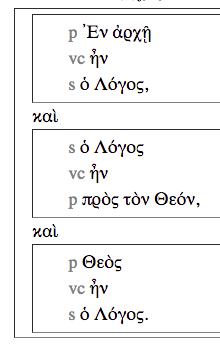 Over time, we hope to make all relationships more explicit, which may well make Boxwood less useful. In the meantime, Boxwood is also helpful as we consider how to simplify the current representation.

The Treedown representation shows much less detail than the Cascadia Syntax Trees used in in Logos 7. In the following Cascadia display, the green box indicates the portions of the structure that are represented in Treedown: 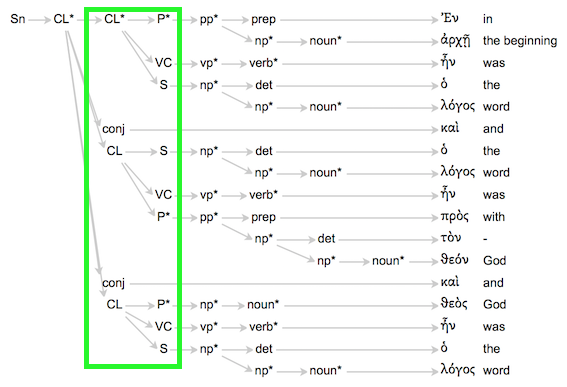 We can use the configuration dialog to trim that down to just clauses and clause functions, which gives us a representation closer to the granularity of the Treedown representation we have been working with: 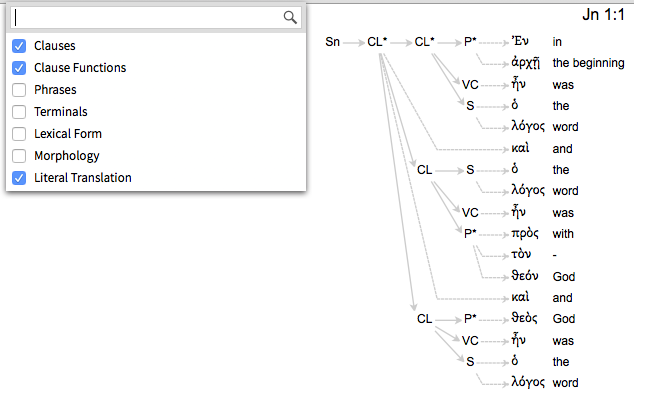 Compare that to the representation of the same sentence we saw at the beginning of this post:

To see the relationship betweeen these two representations, look at the labels for each line in the Treedown, from top to bottom, and look for the corresponding node in the Cascadia representation.

Internally, Lowfat trees have a representation for most of the nodes in the Cascadia graph, and they are available for queries, but Treedown does not display them all. The nodes on the left-hand side of the green box are present in every syntax tree, so they are redundant. The syntax of noun phrases and prepositional phrases is not difficult for most human beings, so Treedown simplifies the display by not showing those nodes. As a result, the natural grouping of words is easier to see in Treedown.

The syntax of noun phrases and prepositional phrases is also relatively simple for computers. At some point, we hope to explore combining Treedown with a simple phrase parser to produce new treebanks that contain phrase structure and morphology.

This section can be safely skipped by anyone who doesn’t need to know how to write and use stylesheets with XML. But it might help explain why XML makes it easier to visualize treebanks in various formats.

CSS (Cascading Stylesheets) is a stylesheet language for XML and HTML. The views discussed in this post are implemented using CSS. If you are not familiar with CSS stylesheets, you may be surprised how simple it is to use this approach. For instance, the Treedown stylesheet adds spacing for a wg element, which represents a word group, if its class attribute is ‘cl’, which indicates a clause. It also ensures that each clause occurs as a block:

If a word group has a role attribute, the role is displayed in small grey letters before the word group itself:

Similar simple rules are used to define each aspect of the Treedown format.

The Boxwood stylesheet draws borders around the left, top, and bottom of each clause:

The Boxwood stylesheet is used together with the Treedown stylesheet.

The Brackets stylesheet uses ‘[’ and ‘]’ characters to mark the beginning and end of a clause instead of using borders.

This is just a teaser, not a tutorial on CSS, but it gives a flavor for the way CSS works with data stored as XML.

Treedown is a notation that makes it easier to think clearly about the structure of sentences. It uses hierarchy and word groups to show this structure while still allowing the text to be prominent, and is easy to read and write. It can be produced from a much more detailed XML structure using a CSS stylesheet. Treedown is designed to be easy to learn and easy to read, without getting in the way of the text. It focuses on the structure of a sentence, providing just enough structure to guide the reader and not get in the way of the text - and I suspect this is just enough structure to guide software in constructing treebanks similar to the Lowfat Treebanks.

Treedown is new, and it is prompting us to consider ways to restructure our Lowfat trees, a process that will probably require significant time. I have mentioned many issues - including word order, coordination, ellipsis, negation, interjections, and vocatives - without addressing them. I have solutions to some of these, but not all, and am actively playing with ways to use Treedown to take these issues into account. These issues will be discussed in future posts.